Love hotels are abundant in Japan. This is largely due to the lack of privacy that is part of daily life in Japan. The walls of some appartements are paper-thin, multi-generational living is quite common and many people still pretend that they don’t have sex before marriage.

This implies that love hotels are by no means only for people who are conducting illicit affairs. A lot of people who visit Japanese love hotels are legitimately together, or even married. Many couples just want to enjoy themselves without having to worry about the children or the neighbours overhearing them.

Nevertheless, Japanese love hotels are all about privacy. The one I visited had screens between parking places and wooden signs to cover the license plate of your car, in case someone you know were to visit the same hotel. 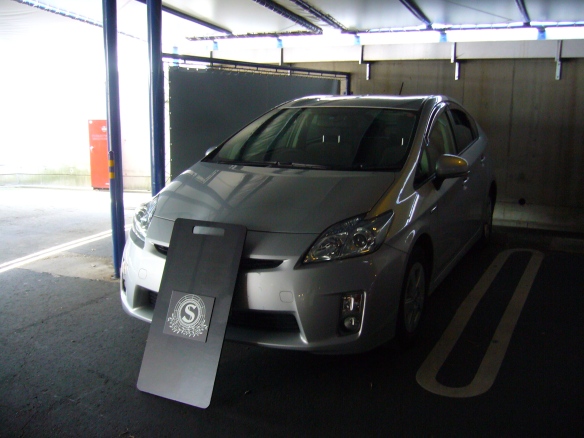 The entrance of the hotel was through the parking garage, to further reduce the chance of anyone seeing you. Everything was very dimly lit, which made taking pictures a bit difficult. I hereby apologize for the quality of the photographs.

The dimly lit entrance to a Japanese love hotel

Once inside, I was surprised by how nice everything looked. Nothing sleazy about it. In fact, it was nicer than some of the ryokan where we sometimes stayed during travelling. I have heard stories about foreigners using love hotels during their touristic travels when all the other hotels in a city were booked full, as can happen for example during golden week, or autumn leaves season in Kyoto.

What a gorgeous lobby! Not at all what I expected from a love hotel.

Inside there is a waiting area, in case you and your lover are arriving in separate cars. Of course the waiting area is nicely partitioned off, again to ensure privacy. Every waiting cubicle has a letter, so you can text your lover to tell them in which cubicle you are waiting. There is also a small ‘bar’, in reality more like a self-service drinks station. Overall, it’s all very nice, anonymous and welcoming. I’ve said it many times, and I’ll say it again: the Japanese are masters of customer service. 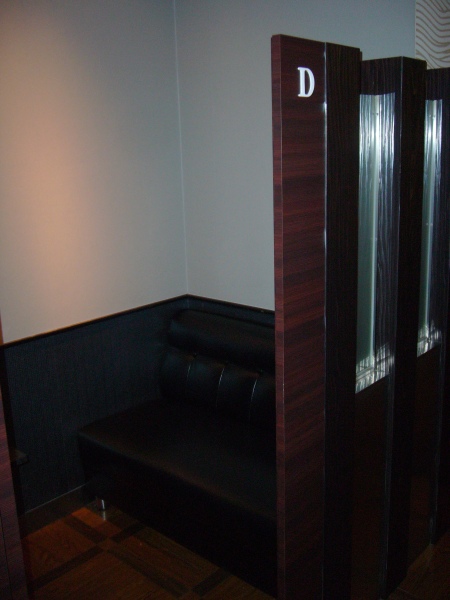 Private waiting area to meet up with your lover, with a letter to indicate each cubicle. Of course the door can be closed, so that nobody sees you. 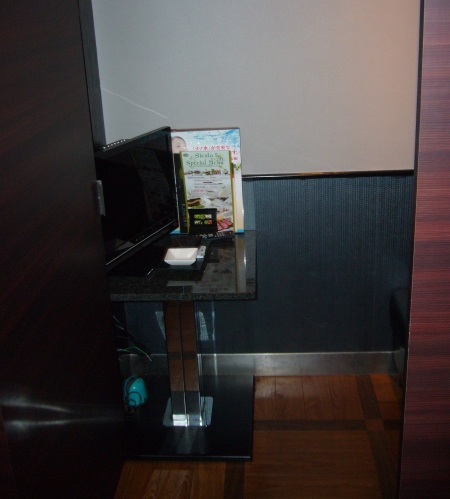 There is even a tv in the waiting area.

A self-service bar. All the drinks are free.

When you have met up with your lover, it’s time to book a room. There is a screen that shows all the rooms. The ones that are available, are lit up. At the time we were there, which was a Tuesday afternoon around 3 p.m., there were not many rooms left. I was amazed to see so many rooms in use on a weekday afternoon. Don’t these people have jobs or something?

An overview of the rooms in the hotel. All the dark pictures are occupied rooms. I am not sure what the red lights on some of the rooms mean though. Perhaps that they are freeing up soon?

A more detailed image of the room information

Prices differ per room and also depend on how long you want to stay. There are two possibilities: you can just have a ‘rest’, which according to the hotel’s website is 4 to 5 hours during the day or 2 hours at nighttime, which starts after midnight; or you can have a proper ‘stay’, which is roughly from 9 p.m. until 11 a.m the next day, on weekends. Weekdays have several different plans for a ‘stay’.

Judging from the pictures, the rooms look very nice and seem quite spacious as well. Or is that just the camera angle? Unfortunately we didn’t have a chance to go up to the rooms. I was there with a (girl)friend, who took me to the love hotel in a spur of the moment, crazy impulse to satisfy my curiosity about every aspect of life in Japan. And of course we had a good laugh along the way! But unfortunately my curiosity wasn’t strong enough to make me spend 6500 yen just to have a quick look at one of the rooms.

Once you’ve made your choice, you can input the room number of your choice on a computer screen. There is a an elevator in the corner to take you up. Very sleek, efficient and anonymous.

The front desk where you input your room of choice. The telephone connects you to an employee if you have any questions.

I made a little video to give you a tour of the lobby of the love hotel. This particular hotel was ‘Hotel Siesta Togo’ near Toyota City (between Toyota City and Nagoya).