Every year in July one of the six Grand Sumo Tournaments is held in Nagoya. It goes without saying that we took advantage of the opportunity to experience a day of real-live sumo.

For those of you who live on another planet and have never heard of sumo: sumo is Japanese wrestling. Two very big guys try to push each other out of a ring, or try to make the other one touch the ground with a body part other than the soles of his feet. There are few things as Japanese as Sumo. 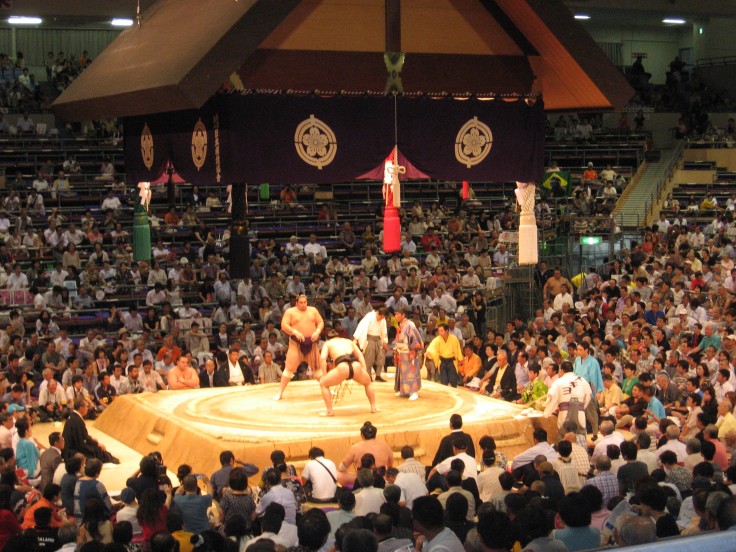 You might think that an entire day of Sumo would be boring. It’s just two overweight guys pushing and shoving at each other, right? Nothing could be further from the truth. Sumo is exciting! And those guys aren’t just fat, there’s a lot of muscle power and technique involved in sumo.  We saw guys who were about to be tossed to the ground reverse the situation with a movement faster than the eye can see and toss their opponent instead.

Each match starts with a guy with a fan singing out the names of the wrestlers. An eerie sound.

Then the wrestlers step into the ring and carry out various ceremonial gestures. They face each other and squat, then get up again. This can go on for up to four minutes while they test each other’s nerve (and the audience’s nerve). They start when both wrestlers have both fists touching the ground at the same time. The fight is often over in mere seconds. A winner is declared, the wrestlers leave the ring and the chanting starts again.

The final matches of the day are preceded by a colourful ring entering ceremony.

The highest ranking wrestler (yokozuna) gets his own special ceremony. It’s a tremendous honour to be made yokozuna. To give you an idea: in the past three hundred years there have been only sixty-nine yokozuna. Currently there is only one, and he is a foreigner. Actually the second highest category of sumo wrestlers also consist entirely out of foreigners.

As sumo is so closely connected with Japanese identity, I was wondering how Japanese people feel about all those foreign wrestlers. A little researched showed that in 2002, the Japan Sumo Association installed a ‘one foreigner per stable (sumo training establishment)’ rule. So I guess in any case the JSA might be a little touchy about it. But the public didn’t seem to mind. Many foreign athletes received a lot of encouragement. So maybe in the end all that matters to the general public is good sumo?

A little tip for people who want to go next year:

If you get the cheap seats all the way at the top of the venue, bring a sweater. The air-conditioning was set to ‘chilling’ and we were sitting right underneath it. If you are willing to invest in a seat closer to stage, be forewarned that the little boxes in the picture below are meant to hold four (!) people.

5 thoughts on “Clash of the Titans”