Today typhoon nr. 15, a.k.a. Roke, passed through Japan. It’s the first typhoon since we’ve been here that passed directly over Nagoya and Toyota-City, and the first one that really had me worried. 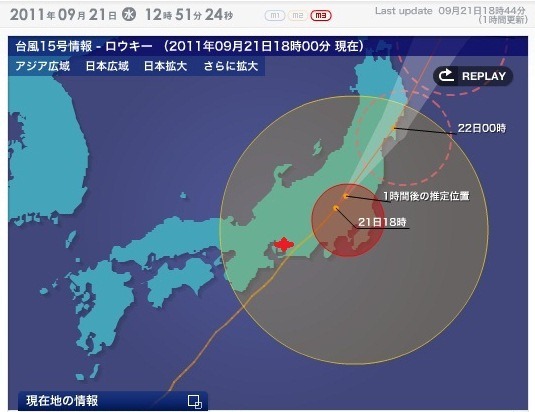 You can see the typhoon passing almost directly over the area where we live, indicated by the red cross. The typhoon is now over Tokyo. Click on the image to go to the Weathernews website and see an animation of the typhoon's trajectory.

Yesterday on the news we watched images of Nagoya being flooded. And that was before the typhoon even arrived. The flooding was caused by a rain front preceding the typhoon. Now that the typhoon has passed, it seems like in Toyota City it was relatively mild. But the news constantly shows images from all over Japan with fallen trees, cancelled trains and people almost being blown over by the strong wind. Several areas around us, like Nagoya and Okazaki, experienced flooding.

This is the typhoon at its worst in Toyota City, around 3 p.m.

By 6 p.m. everything seemed fine again. 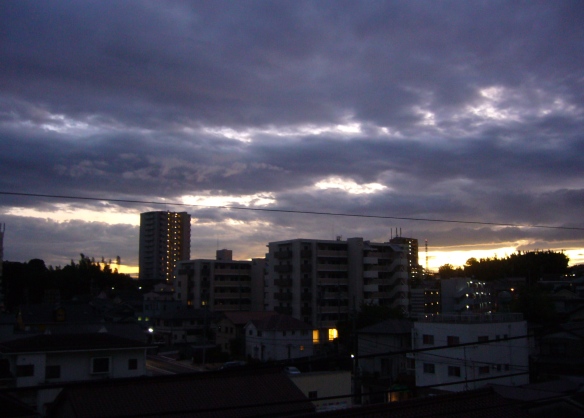 The view from our balcony around 6 p.m.

While I was preparing for the typhoon and feeling anxious about what was going to happen, it struck me how strong the forces of nature are in Japan. Earthquakes, tsunami, typhoons, landslides, flooding, volcanic eruptions, … In Japan you never know what nature has in store for you. I feel I should be prepared for anything, with an emergency kit standing by at the front door. I’ve started memorizing emergency numbers and found out where to evacuate to in case of a disaster. To experience the forces of nature in all their might is a new experience for me. In Belgium nature is usually very mild.

I wonder how this ‘constant threat’ has influenced Japanese culture. This topic is broached in one of my favourite books: James Clavell’s ‘Shogun’. It is suggested there that because of the regular confrontation with the fact that anything can happen at any time, Japanese people live more in the moment. I indeed find this confrontation with the elements humbling. It makes me grateful for every beautiful day. I can imagine that experiences like this might lead one to appreciate the transient beauty of for example cherry blossoms even more.

4 thoughts on “Forces of nature”