The summer in Japan is drawing to an end. Yesterday school started again and typhoon number 12 is making for gloomy and rainy weather. Time for a retrospective on summer in Japan.

Weather – Before coming here, everyone had warned me about the ‘crazy Japanese summer’ and the especially the crazy weather. I thought people were exaggerating, as is usually the case with all things concerning Japan. It turns out I was wrong. The Japanese summer weather is unlike anything I’ve experienced before. The heath and humidity are so strong that even just breathing makes you break into a sweat. And apparently this was a fairly cool summer. I can’t wait for next year.

Super Cool Biz – Because of the power shortage due to the Tohoku quake aftermath, the government launched the ‘Super Coolbiz’ campaign. The idea was that businesses should set the air conditioning no lower than 28°C. In order to cope with the summer heath, office workers were encouraged to wear outfits that are still appropriate for the office yet cooler than normal. This style is termed Coolbiz. Things like polo’s, shirts without a tie, and even the occasional sandal were allowed. This not only led to energy savings but also to an increase in menswear sales, with stores launching special coolbiz offers.

Fireworks – Many cities organise firework displays during summer. Toyota City has a yearly firework display at the end of July that lasts for two whole hours. People also buy smaller fireworks to set off themselves in a park or at the beach.

Yukata – Wearing a yukata, especially at the aforementioned firework displays, is typical for summer. Click here to read about my first time wearing a yukata.

Bonodori dancing – Another occasion for wearing a yukata is at the Bonodori dances in August (although in the Tokyo region it’s mostly in July). People form a circle around a stage that houses the musicians and perform the dances in unison. Young and old join together to enjoy this typical summer pass time. Read more about Obon dancing. 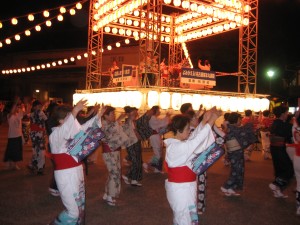 It really is young and old together

Shaved ice – A cone of shaved ice with sweet syrup is a refreshing summer treat. Stores selling this treat are marked with the kanji for ice. 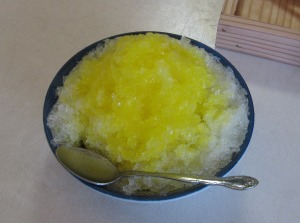 Climbing Mount Fuji – There is a saying in Japan: ‘He who climbs Mount Fuji once is a wise man, he who climbs it twice is a fool’.  The official climbing season for Mount Fuji is during July and August (mostly because of the weather). During these two months, people from all over Japan flock to Mount Fuji to try themselves against the mountain and to see the sunrise from the top of Mount Fuji. There is usually a cue to reach the top. Can you imagine a cue on top of a 3776 meter high, barren volcano?

Wind catchers – Little bells that produce a delicate sound as the wind catches them are hung in front of open windows or doors. The sound is supposed to refresh you and make every breath of wind more noticeable during the summer heat. The sound of wind catchers is typical for summer in Japan and often invokes a nostalig feeling, reminding one of summers past.

Cicada’s – Around mid July the cicada’s start to chirp. They are huge flying insects that gave me quite a scare the first them I saw them. They produce their typical sound at an incredible volume.

A cicada, definitely over 5 cm

3 thoughts on “Summer in Japan”