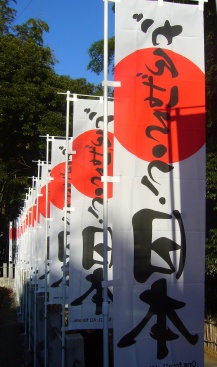 It’s over a year ago since the big earthquake and the ensuing tsunami took place in Japan. But even now I regularly keep seeing ‘Ganbarou Nippon’ flags en logo’s everywhere.

‘Ganbarou Nippon’ (がんばろう日本) means ‘Do your best, Japan’ or ‘Let’s go, Japan’. Following the March 11th quake and tsunami, the ‘ganbarou nippon’ campaign was launched. Abroad it is more commonly known as ‘Pray for Japan’. I’m not entirely sure on the details but I imagine the campaign was meant to encourage the victims of the disaster and to rally the rest of the nation to donate and volunteer where they could.

Now, one year later, the Japan National Tourism Organization has started a ‘Japan. Thank you.’ campaign. It consists of posters and banners ‘aimed at thanking overseas organizations for their support after the March 11th disaster. It also means to thank tourists who visited Japan and contributed to its economic health following the disaster.’ (Quoting Japan Today).

I came across one of the ‘thank you’ posters in  Nagoya Castle. I was elated to recognize artwork by Kimura Hideki, a Japanese artist that I had discovered recently and was proudly considering ‘my secret find’. But maybe he is more famous than I realized.

Kimura Hideki is based in Gion, the geisha area of Kyoto. He has a shop with textiles, paintings and other items, and he paints murals all over Kyoto. His artwork is a mix of Asian and Western design. I love his graphic style!