In Japan, it is customary to send out New Year’s cards, or ‘nengajou’. While in the West, traditional Christmas and New Year’s cards are gradually being replaced by electronic versions and e-mails, in Japan cards are still being sent through the mail (which I quite like). 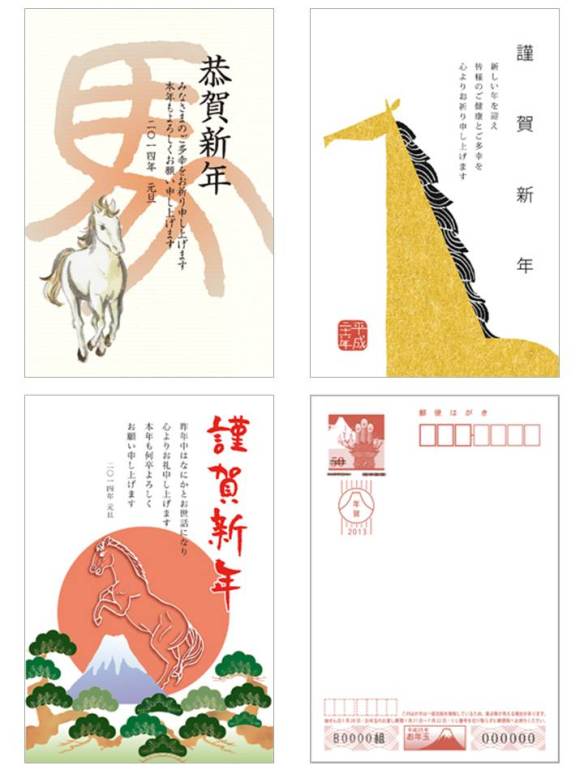 A few examples of the New Year’s cards that the Japanese postal services offer for 2014. Since 2014 is the year of the horse, many cards feature horses. Usually one side of a Japanese New Year’s card will have an image and/or a message, and the other side is for the address (featured on the bottom right).

New Year’s cards are big business in Japan. Every year, millions of cards make their way into mailboxes all over Japan. It is not uncommon for one household to receive up to 200 cards. Traditionally you are supposed to send a card to everyone you have some sort of relationship with or social obligation to. That includes all of your coworkers, for example. But these days not all youngsters comply with this rule.

The postal service is of course well aware of this massive card sending habit and organises its service accordingly. All the cards posted before December 26th are guaranteed to be delivered on the 1st of January. That’s right. Not on the 31st, not on the 2nd. No, when the Japanese provide a service, they mean business. Postal workers work on the national holiday to ensure that everyone receives their cards on the 1st.

Every year I gladly join in this Japanese New Year’s card extravaganza. Having lived in Japan for a year, I met many people who really did their best to make me feel welcome and who were very generous towards me. Sending New Year’s cards to my Japanese friends seems like the perfect way to show them that they remain in my thoughts and that I am grateful for everything they have done for me.

At first, writing New Year’s cards in Japanese and figuring out the correct way to post them seemed like a daunting task. Once I finally figured everything out, I decided to write a guide for other people who might like to send cards to Japan as well.

Make sure to send the card well in advance. It should arrive in Japan before the 26th of December. Another important point to note is that according to Japanese custom, you shouldn’t send a card to someone who has lost a loved one in the past year. But don’t worry if you are not sure about the addressee’s family situation. According to a helpful comment by Ayako Mathies, the original custom is that it is alright so send a card to families who have lost someone, but these families are not expected to send out cards or replies themselves.

Since it will be difficult to find the typical Japanese New Year’s cards abroad, I recommend sending a card that is typical of your home country. For example, being from Belgium, I opted for cards with Christmas trees or cute little shops covered in snow. I tried to choose cards that invoke the romantic European winter feeling.

If the addressee speaks English or is familiar with foreign cultures, you may of course write whatever you like. If you are going for a traditional Japanese message, here are some things you could write:

After this, you can add a personal message or you can add words of thanks, requests for continued favor or wishes for health. Some examples from japanese.about.com:

Japanese addresses can be a bit tricky at first. If you are sending a card from abroad, you will most likely have a horizontal envelope in a standard size. Here’s an example of how to address an envelope to Japan: 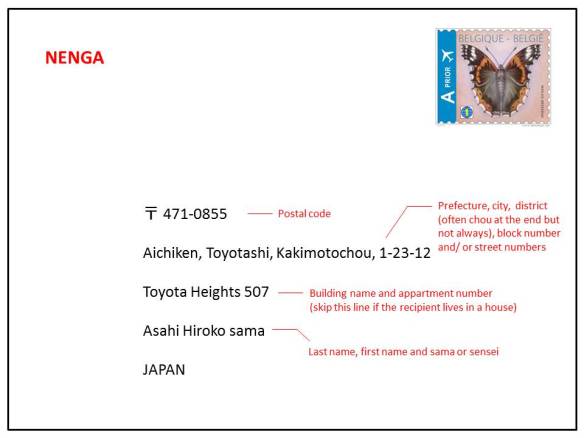 Example of how to address a Japanese New Year’s card

Write ‘NENGA’ in big, red letters in the top left corner (or in kanji: 年賀). It should be clearly visible. This tells the post office that it is a New Year’s card and that they should hold it until the 1st of January. In Japan, it is acceptable for cards to arrive after the 1st of January but not before the 1st. Make sure to never write a person’s name in red ink. This is considered bad luck because names on graves are also red.

Write your own address on the back of the envelope. And of course don’t forget to put a stamp on it.

All finished! Your card should be good to go!